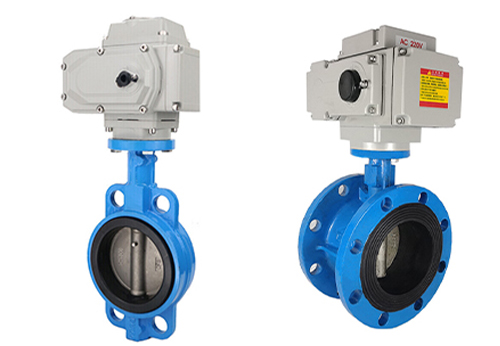 In addition to the different structural forms, if it is in the case of the same parameters, the biggest difference is that the connection method is different, that is, the installation form is different, which depends on the site conditions!

The difference between electric wafer butterfly valve and electric flanged butterfly valve:
The thickness of the electric wafer butterfly valve is thinner than that of the flanged butterfly valve. There are no flanges at both ends of the valve body, but only a few guide bolt holes. The valve is connected to the flange at the pipe end with a set of bolts/nuts. It is suitable for places where the space is relatively narrow or where the pipeline is restricted. The advantage is that it is more convenient to disassemble, the valve cost is low, and the space is small, but the disadvantage is that there is a problem with one sealing surface, and both sealing surfaces have to be disassembled!

The electric flange butterfly valve has flanges at both ends of the valve body, which are connected to the pipeline flange. The sealing performance is more reliable than that of the wafer butterfly valve. It is generally used in places with large diameter or high pressure, but the cost comparison Clip-on butterfly valve high.

Choice between the two:

However, there are still some things to pay attention to in the design. For example, the valve bolts of the wafer type are generally relatively long. Under high temperature conditions, the expansion of the bolts may cause leakage, so it is not suitable for large pipe diameters under high temperature conditions. . Another example is the wafer-type butterfly valve that generally cannot be used at the end of the pipeline and where the downstream needs to be disassembled, because when the downstream flange is disassembled, the wafer-type butterfly valve will fall off. In this case, it must be shortened separately. The section is easy to disassemble, while the flanged butterfly valve does not have the above problems, but the cost will be higher.

The purpose and characteristic of butterfly valve